Life can change in an instant. 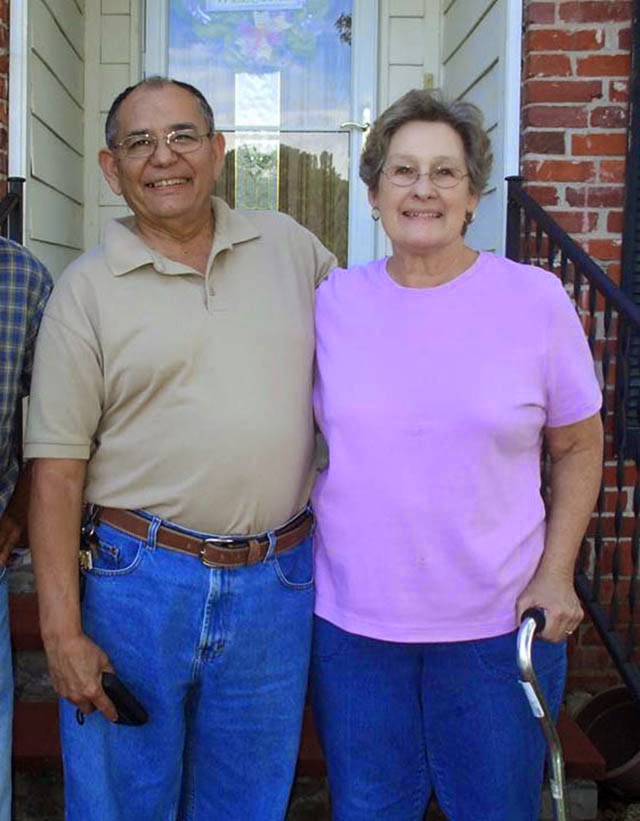 Uncle David and Aunt Annette, visiting my parents house during their travels.

My Uncle David and Aunt Annette have been full time RVrs for years. They lived a simple life, traveling across the U.S. visiting relatives and friends and making new ones along the way. They were content and life was good, until a fateful day on Oct. 3, 2014. While traveling near Prescott, AZ, a sudden downdraft caused their trailer to fishtail. Unable to steady it, their truck and trailer flipped over 3 times, landing upside down on the road. Everything was totaled. My Uncle David was airlifted to Flagstaff hospital and is in ICU with a lacerated liver and broken bones in his neck. I am beyond thankful that they are alive but their life is anything but ok. Thankfully, my aunt had only minor injuries, however, the travel trailer was their only home. They lost every single item inside it so in a sense, they are homeless with mounting medical bills as my uncle will have a long road to recovery.

We have started a fundraising site through giveforward.com to help offset the medical costs and basic necessities that they will need. Your prayers and support are very much appreciated by all of our family and we encourage you to check out the site and forward it to everyone you can think of. Click on the link here or on the photo and link to the right to visit the site: DAVID AND ANNETTE FUNDRAISER


Posted by Don and Denise Sullivan at 11:07 PM No comments:

My favorite land in DisneyLand is AdventureLand. I love everything about it... the Tiki Room (yes I sing along with the birds), the decor, Indiana Jones ride, Dole Whips, the jungly feel. So of course, I had to make an AdventureLand quiet book page. 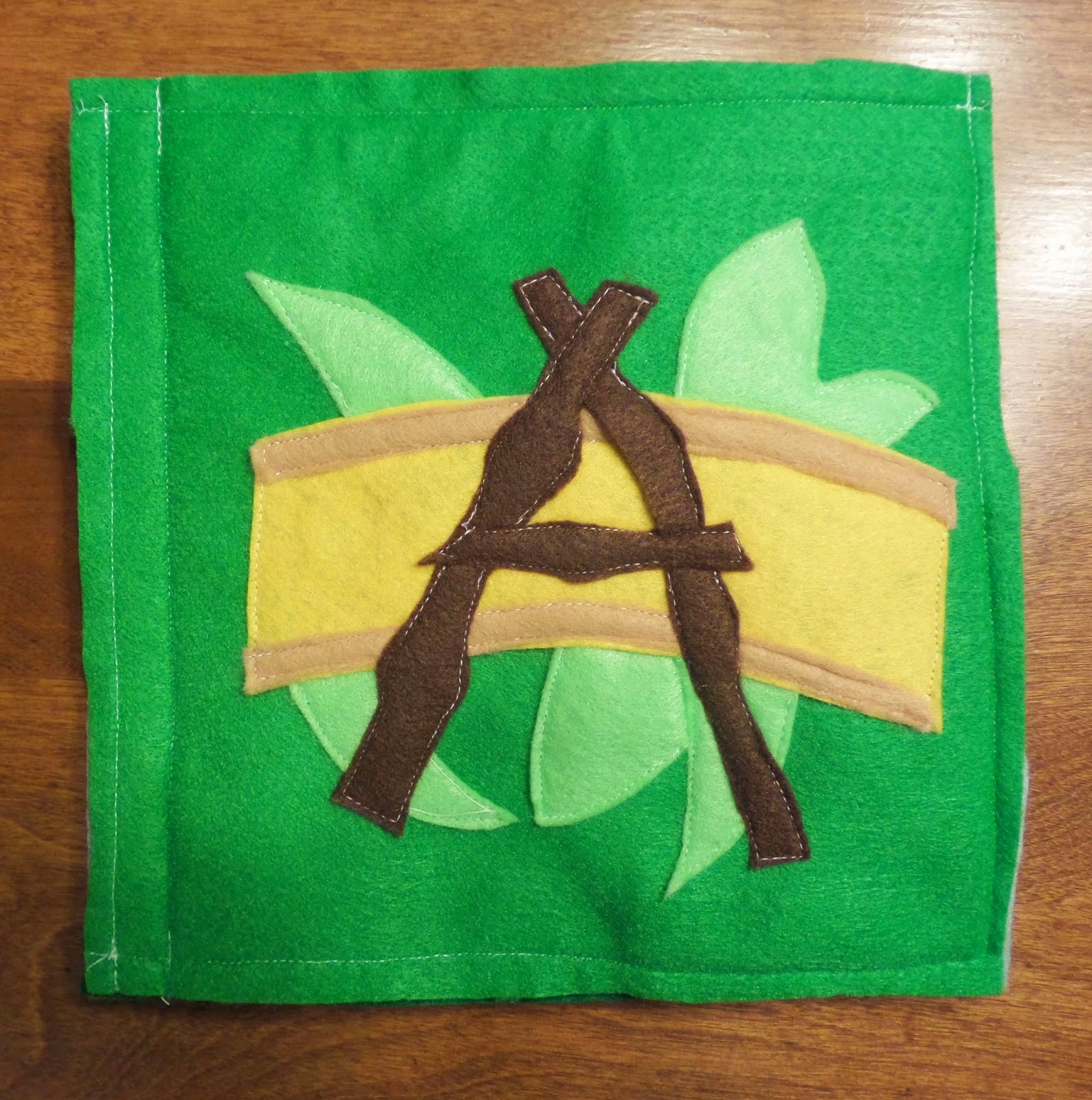 Instead of tediously cutting out and spelling the entire word, I opted for the first letter. Although I prefer the look of hand stitched pieces, all felt pieces are machine stitched to save time. 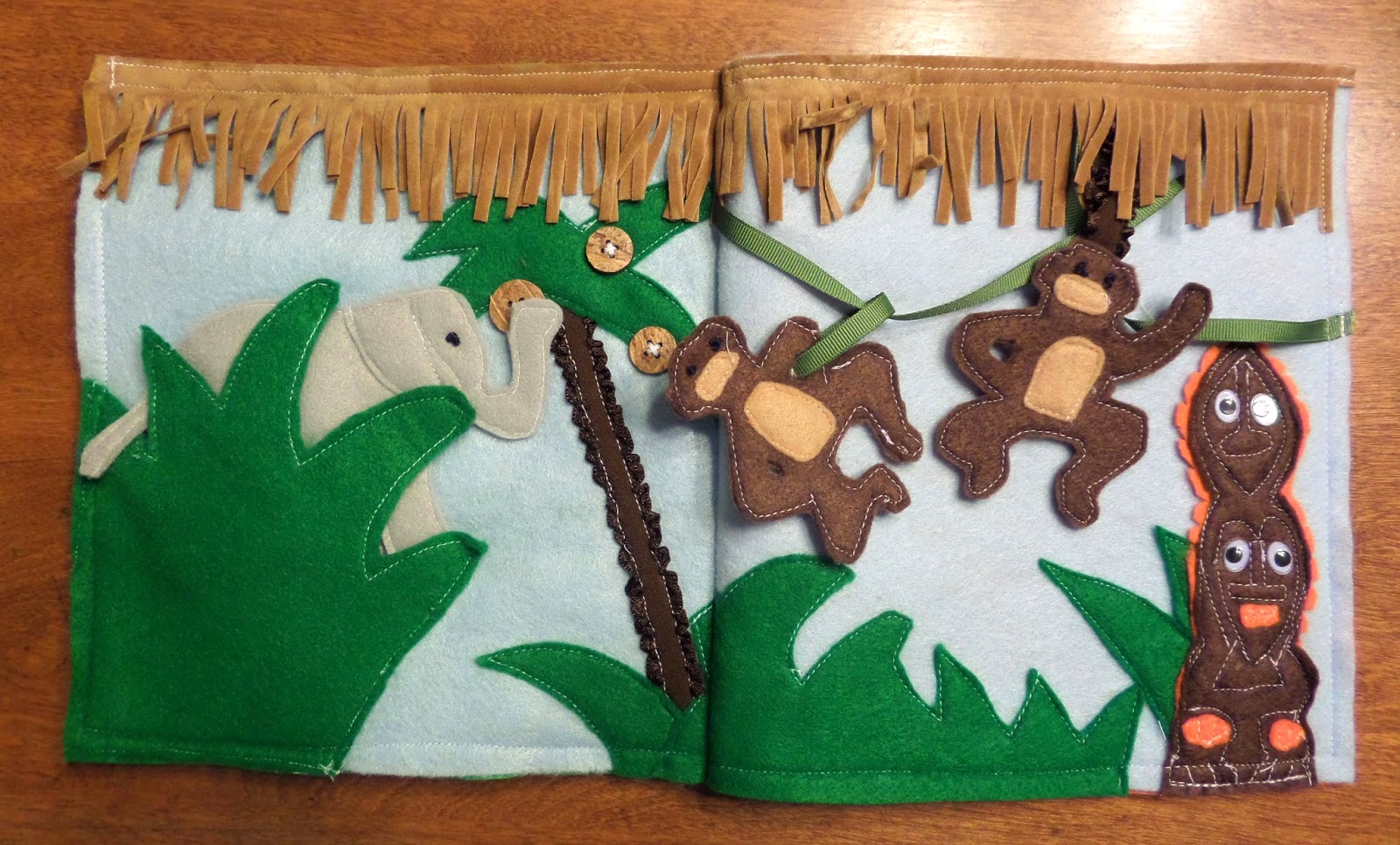 Inside spread has a removable elephant, coconut button tree, swinging monkey on the vine and monkey attached with elastic that J can pull. The tiki has glued on googly eyes. 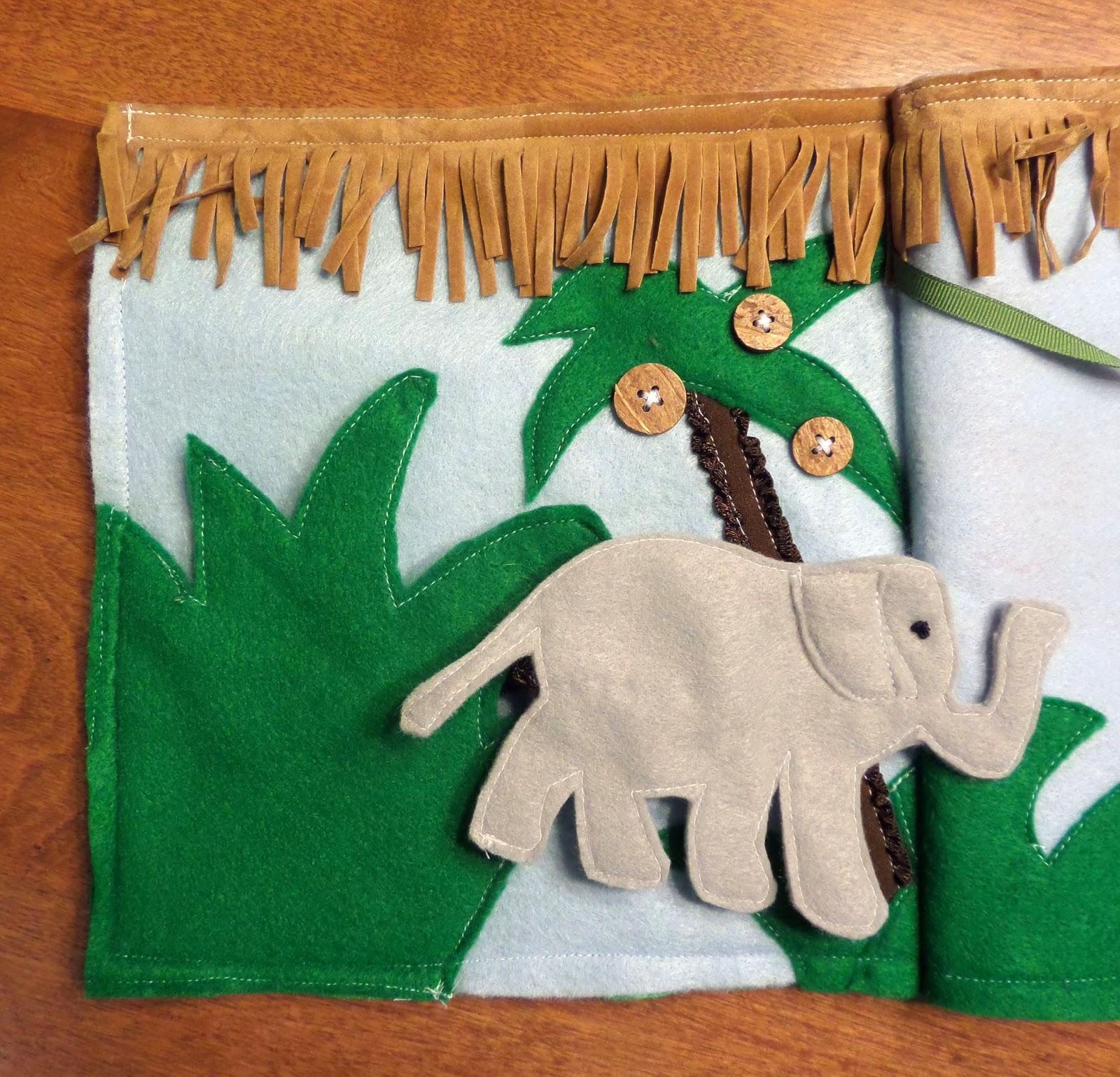 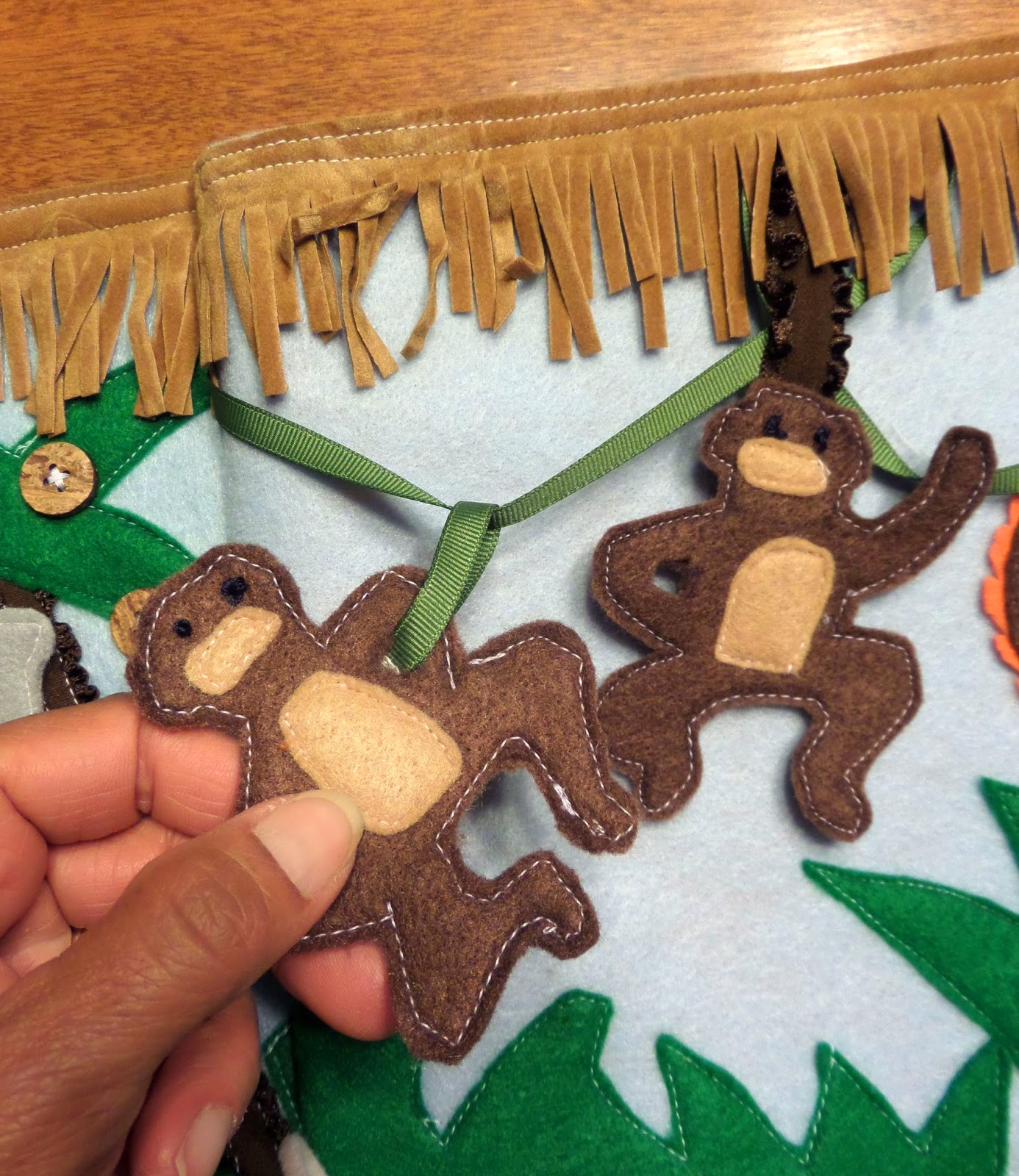 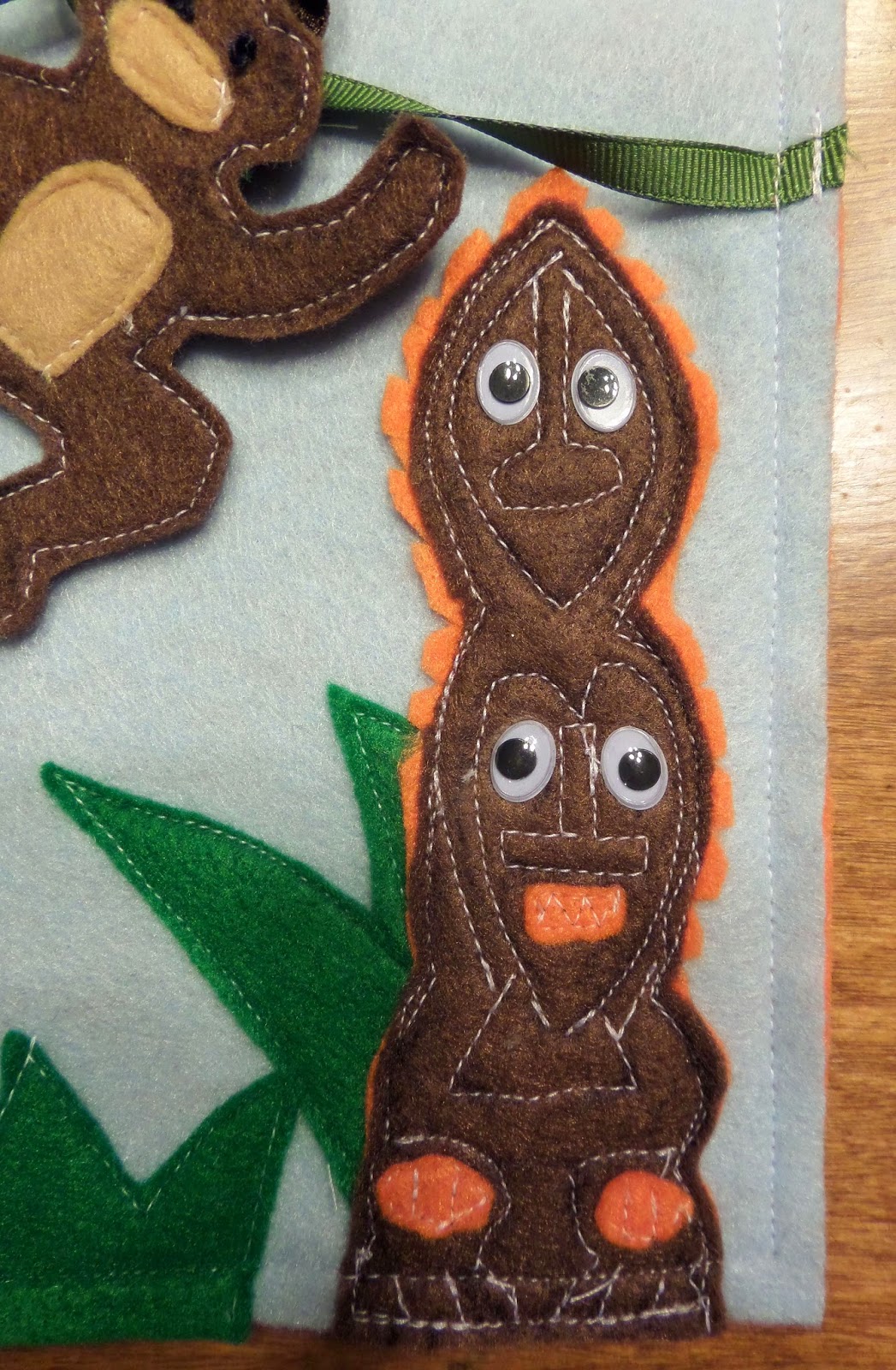 Posted by Don and Denise Sullivan at 11:55 PM No comments:

YARRRR!! Love Pirates of the Caribbean ride at Disneyland, not to mention the movies too! I definitely wanted to make a quiet book page like this for J. My inspiration and patterns came from this talented designer of quiet books. 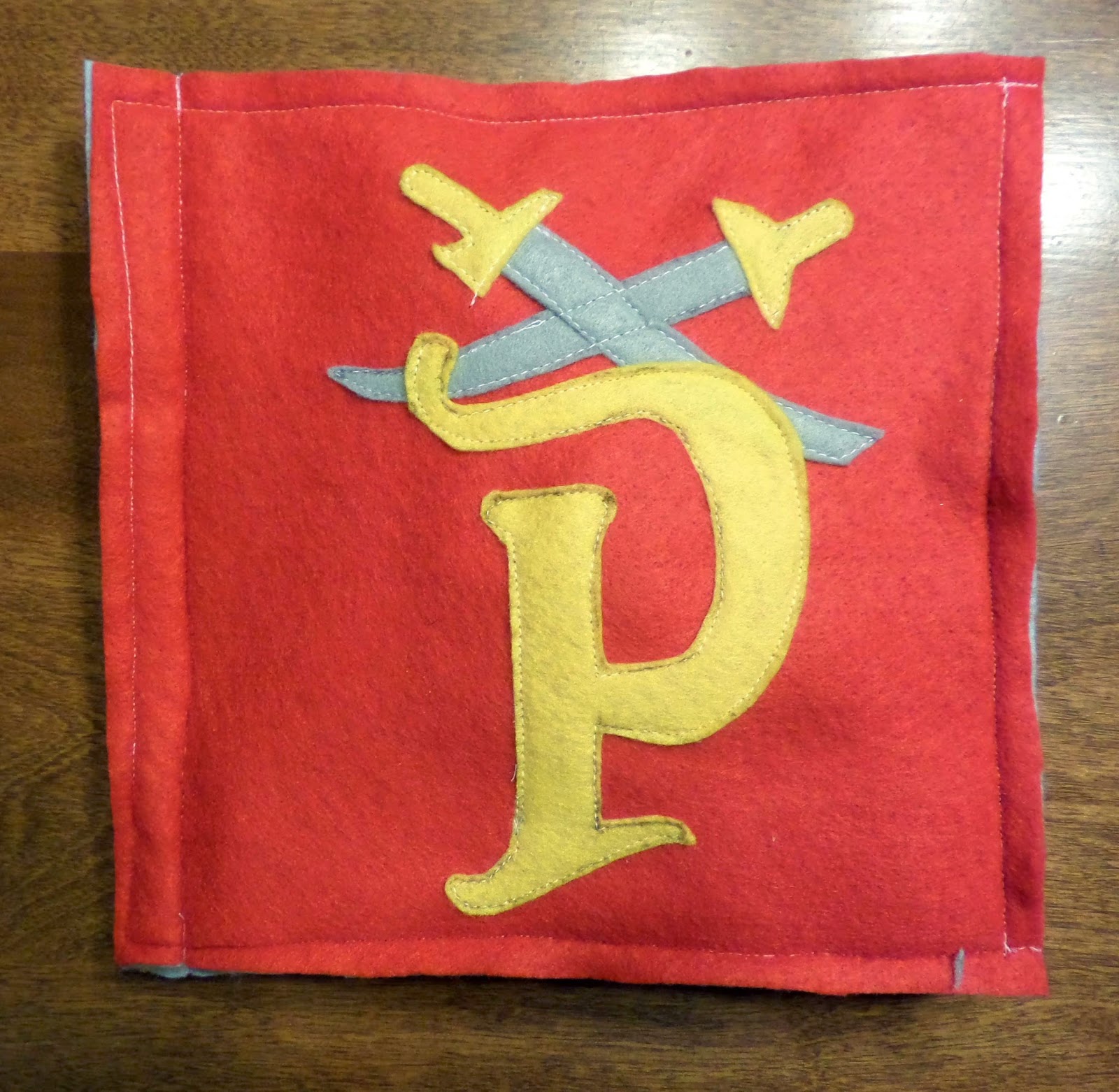 Front cover above. The spread below has a treasure chest and map that open. 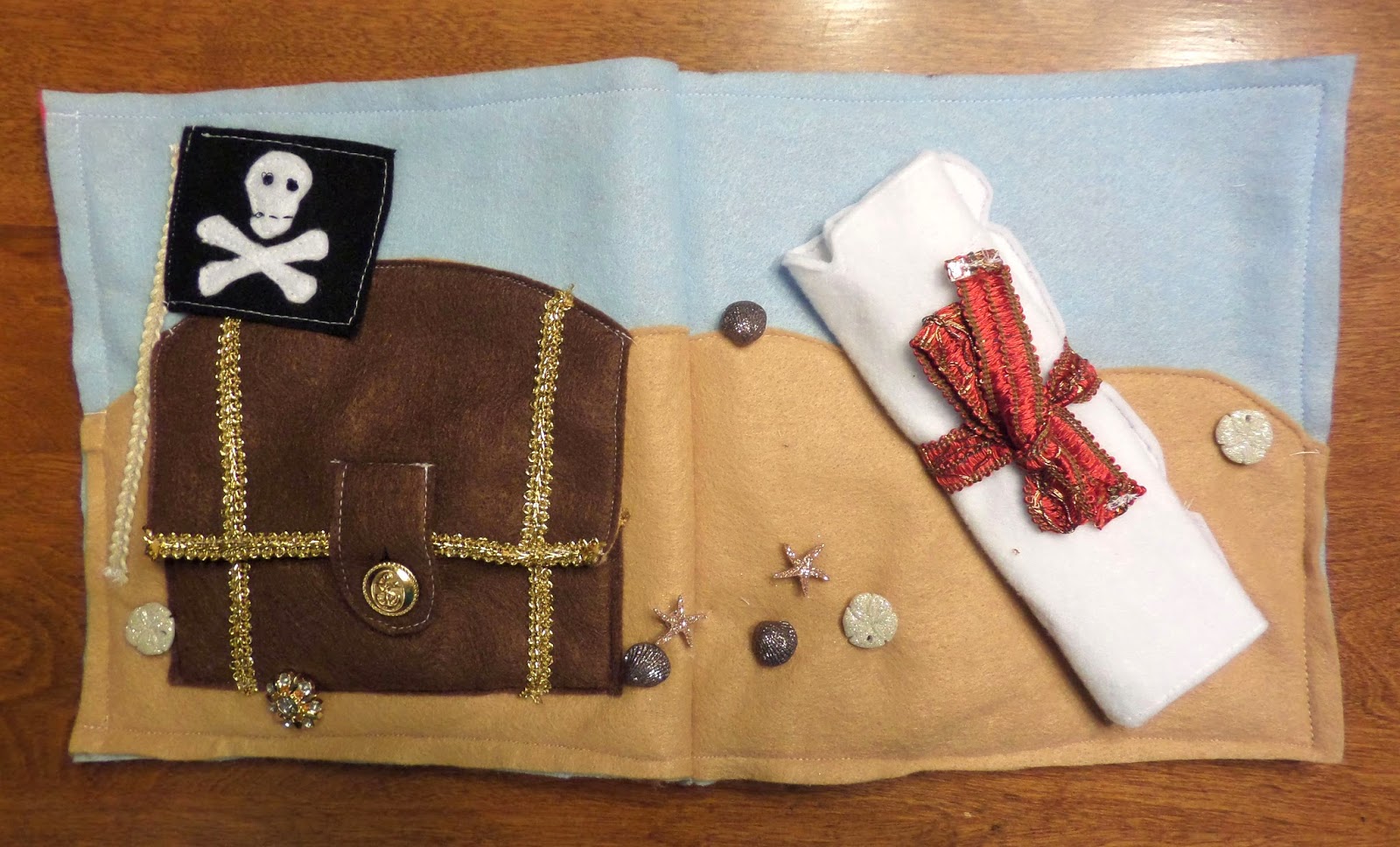 The chest teaches skills like buttoning and counting the gold coins. 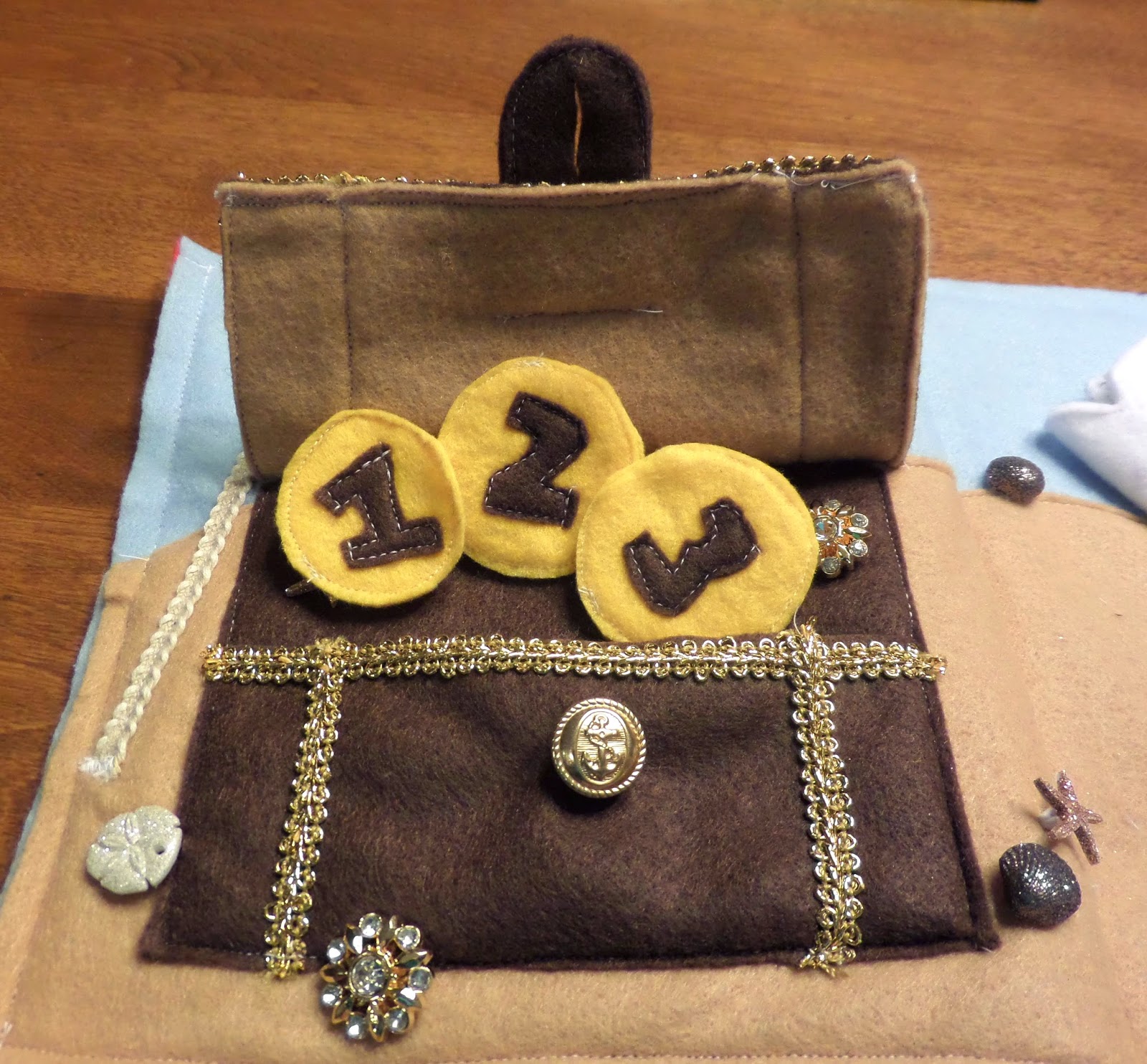 The treasure map teaches how to tie and fold. 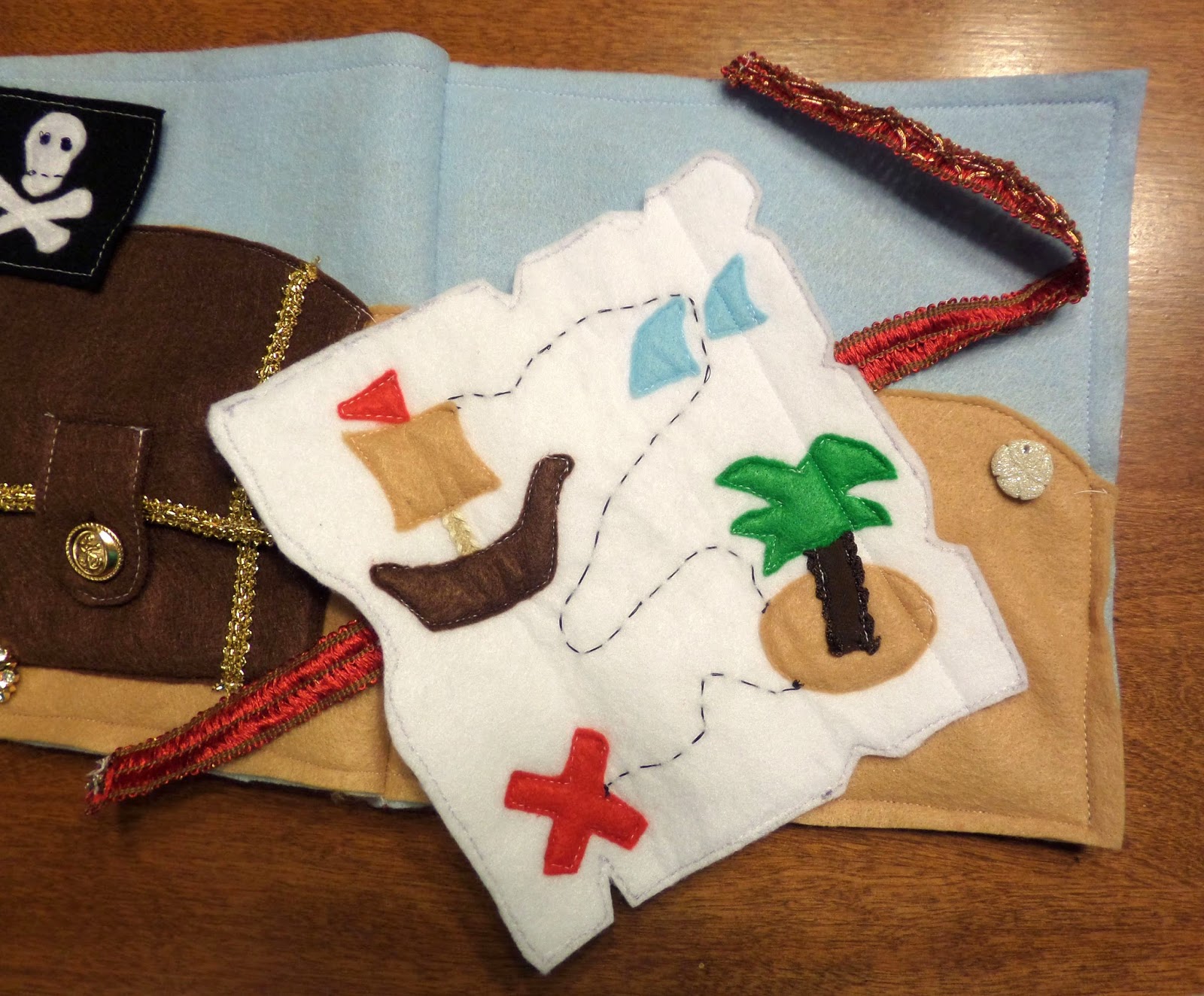 Posted by Don and Denise Sullivan at 11:54 PM No comments:

Frontierland has one of my favorite rides, Big Thunder Mtn Railroad (I swear it's faster when you ride it after dark). The Golden Horseshoe Revue is a fun place to rest and eat. I decided to make a quiet book page that featured zipper skills and tactile sensory objects. 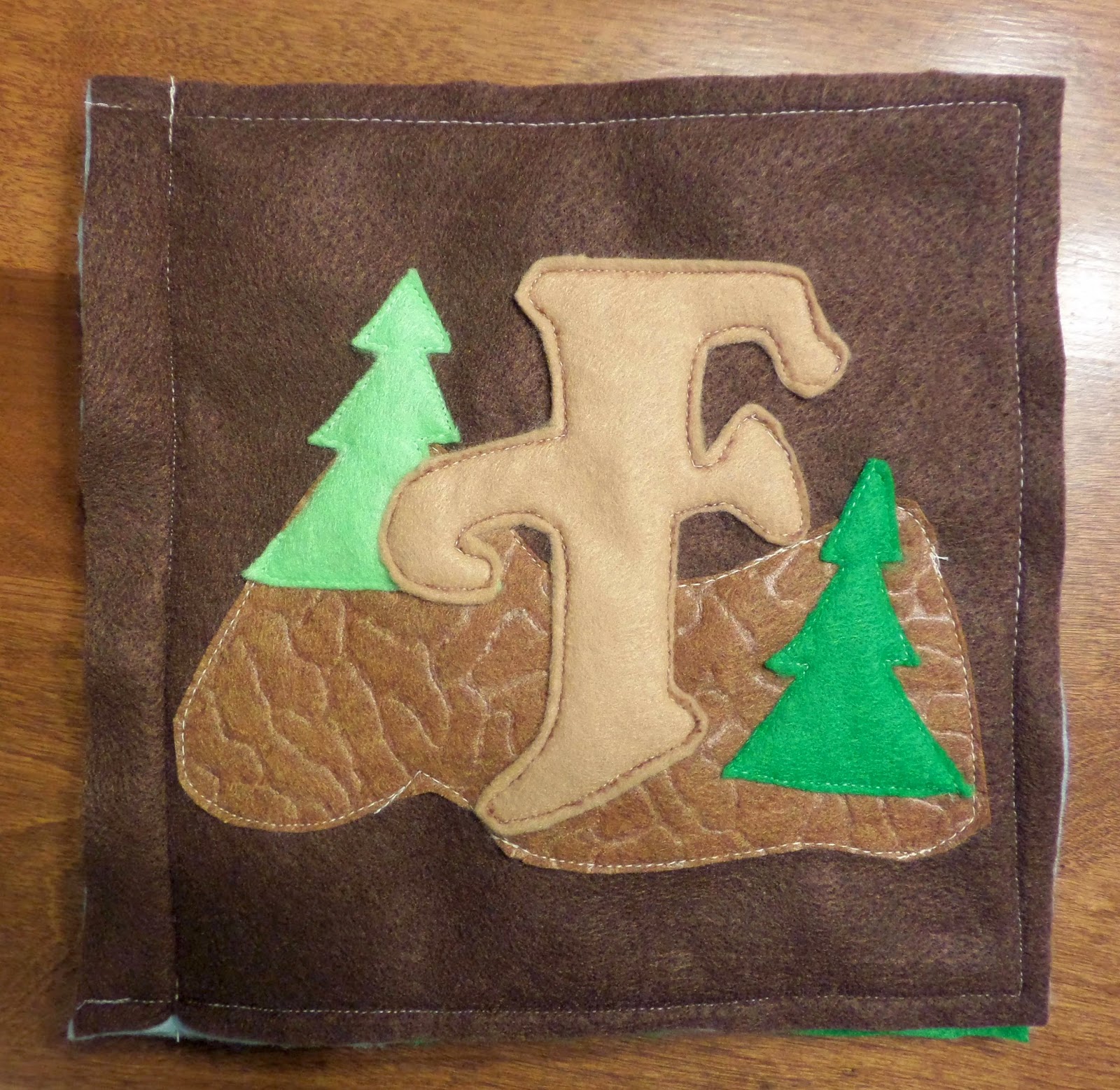 Front cover above. Spread below has a zipped teepee and ribbon waterfall. 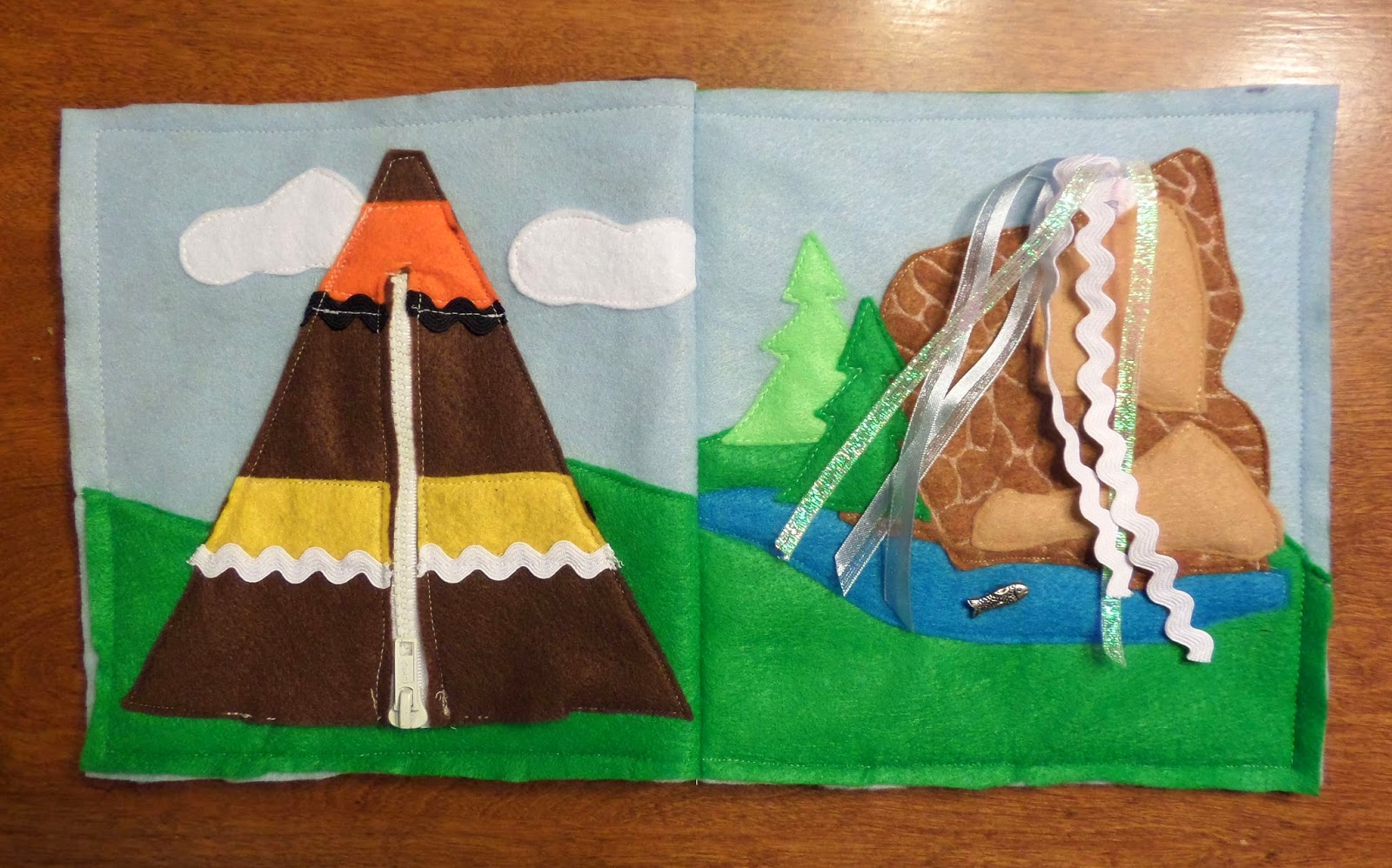 Teepee unzips to reveal a campfire. 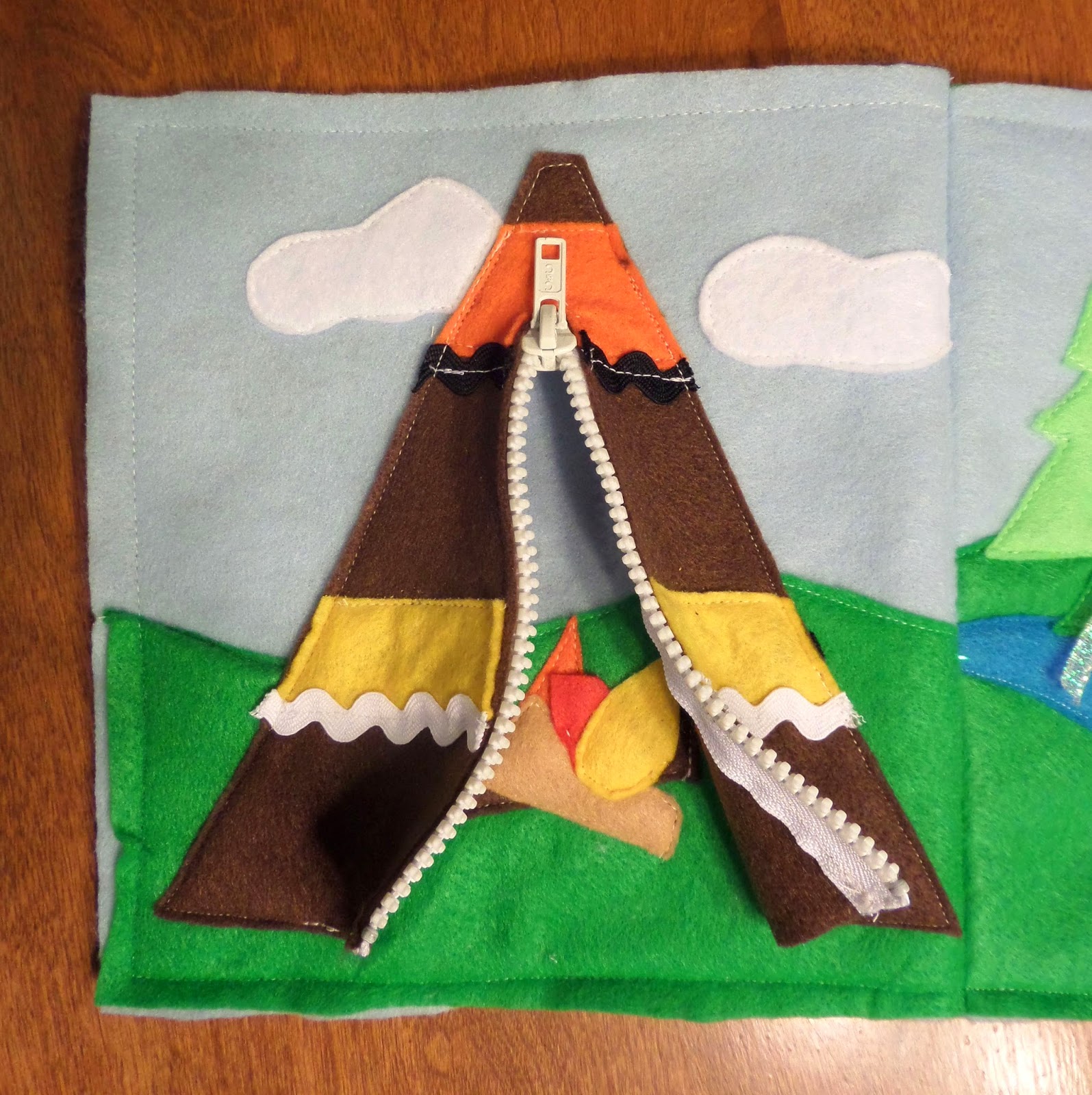 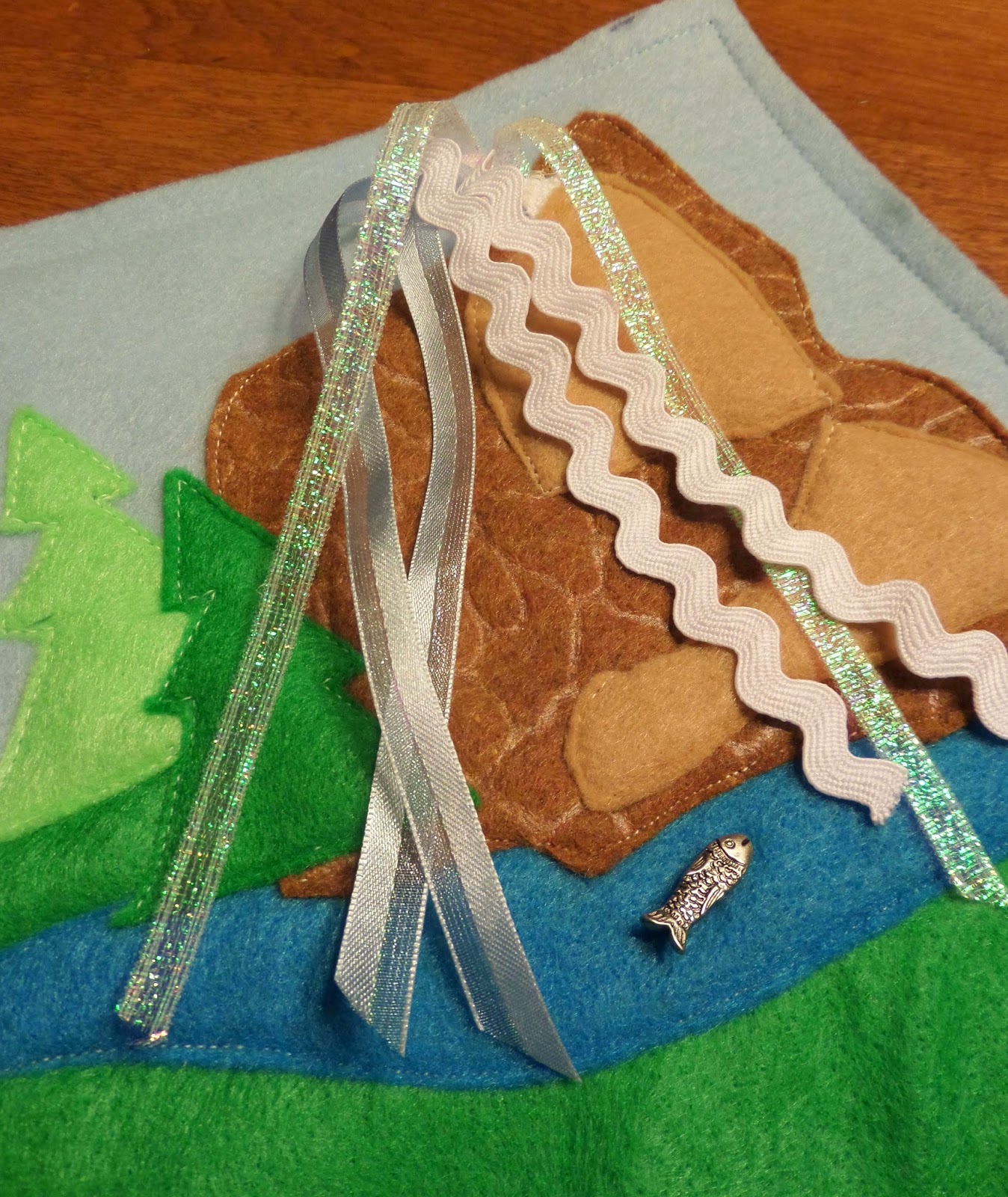 Posted by Don and Denise Sullivan at 11:53 PM No comments:


This was the first quiet book page I made and fun to create. I love riding Space Mtn in Tomorrowland. In fact, we lived in socal for a couple years so I got a Disneyland SoCal annual pass. On my way home from work, I would occasionally pop in, hop on Space Mtn, chuckle at all the tourists frantically rushing from ride to ride (although that's ME now. boo) and head back home. Sometimes, I would stop in and grab breakfast on Main St before heading on to my job. Good times! 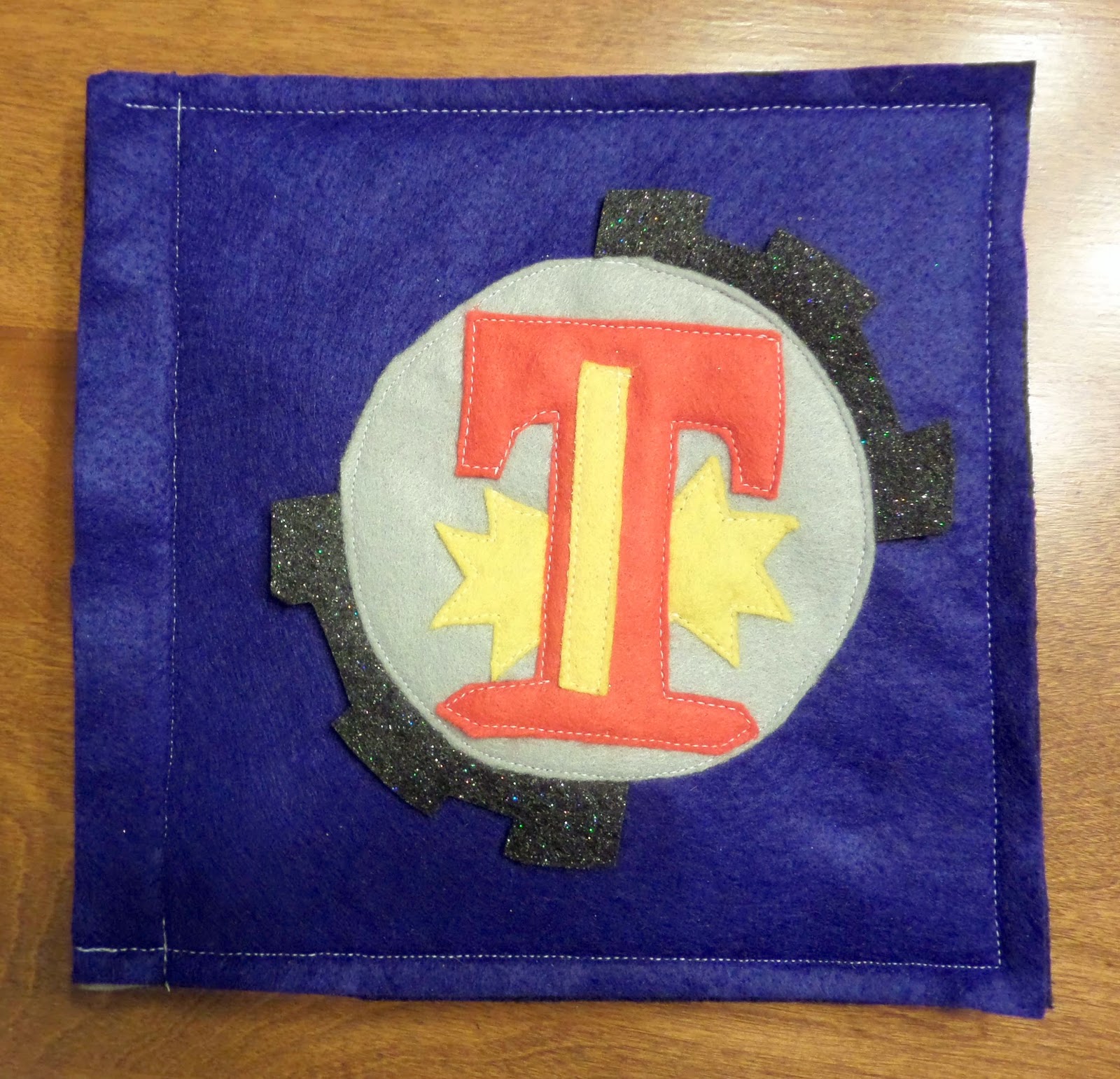 Cover above. I found this awesome glittery felt to represent the galaxy. 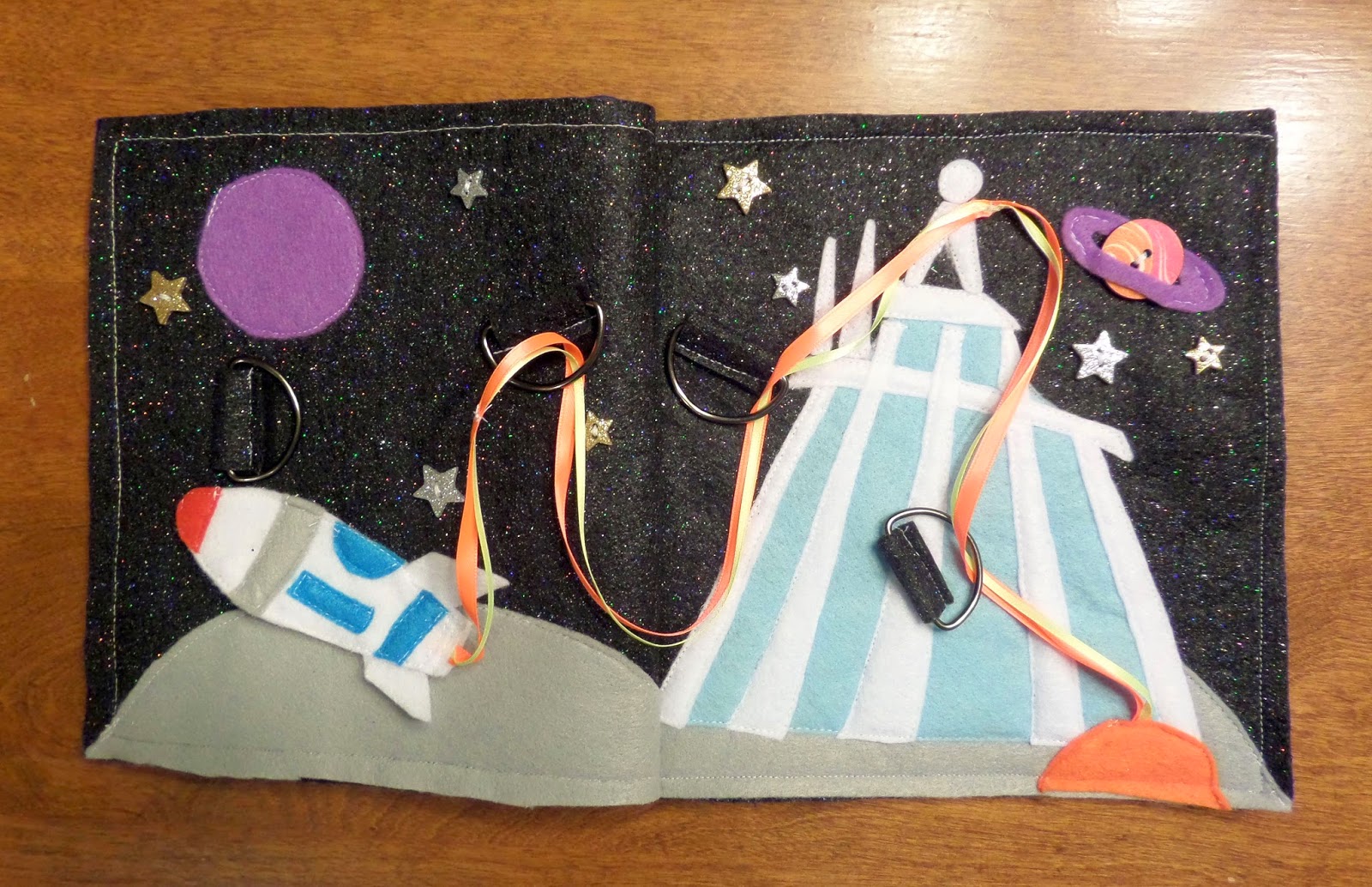 J can "fly" the rocket ship through the rings. 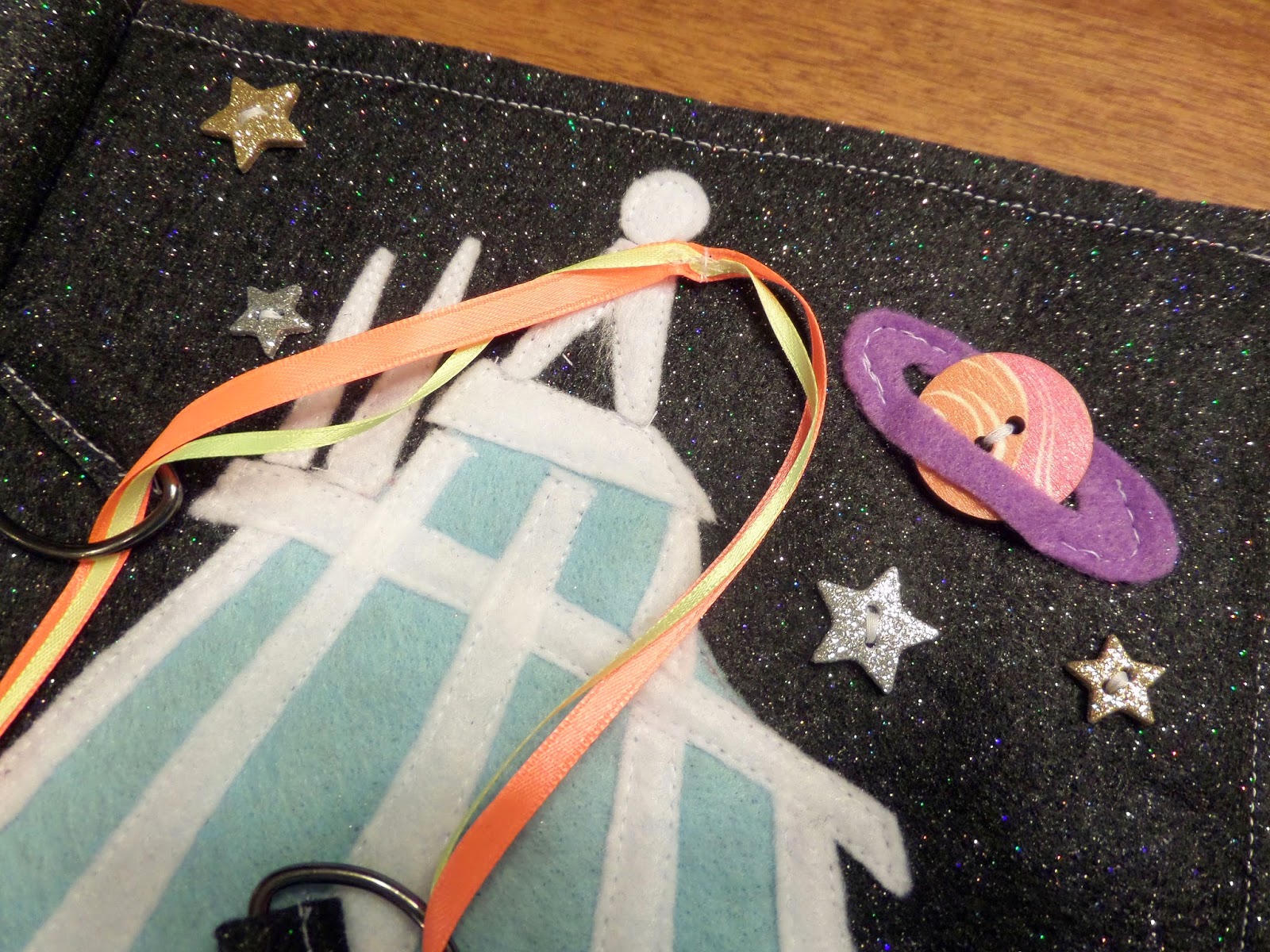 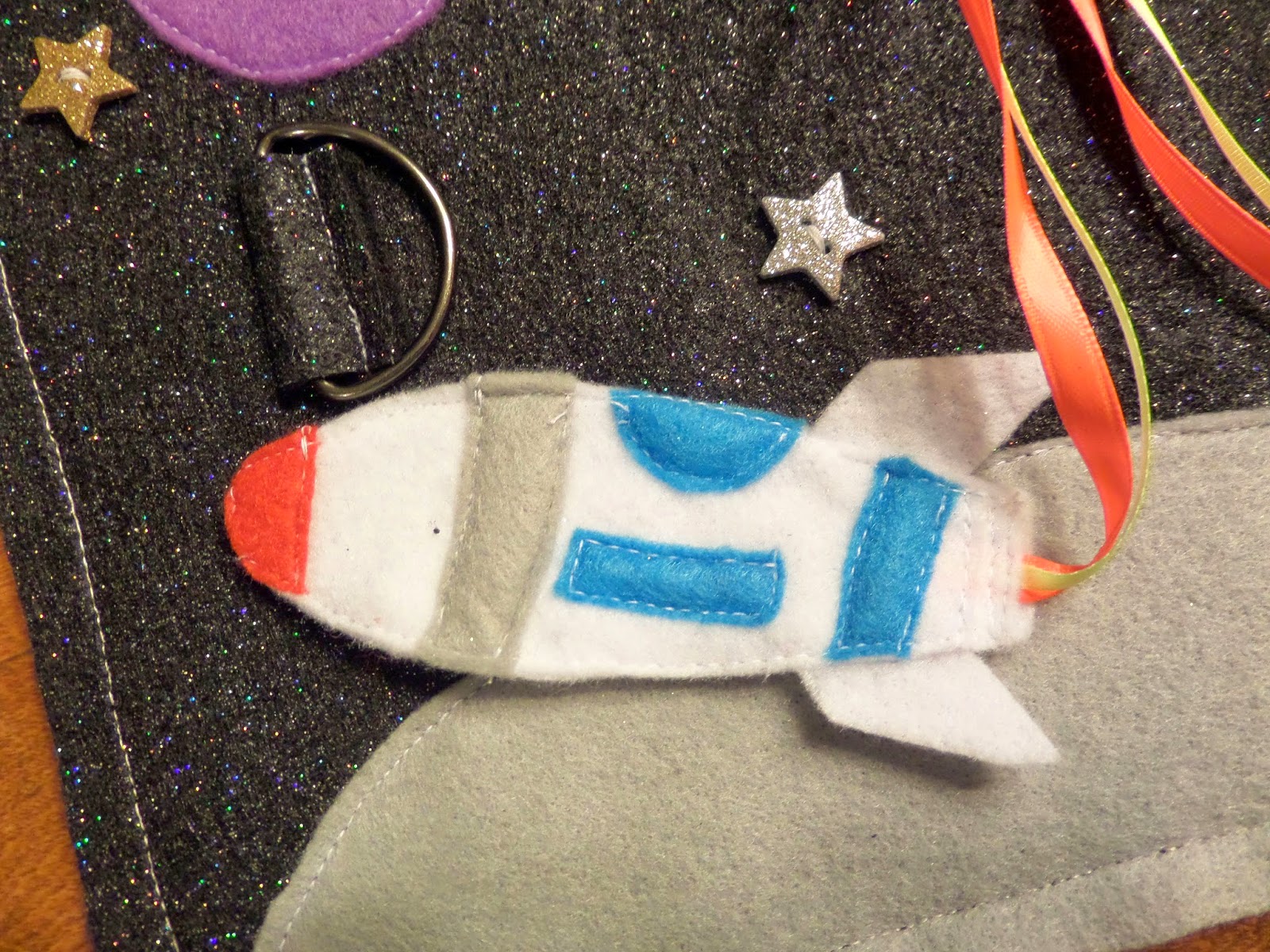 Posted by Don and Denise Sullivan at 11:53 PM No comments:

I have been looking high and low for a Quiet Book for our 2-1/2 yr old son. A toy he could fiddle with but quiet enough that it didn't require batteries, would entertain him in the car, or not reverberate off the walls if he threw it on our tile floor. I remembered these as being fabric books that taught you how to tie, lace, zip, snap, button etc. Shouldn't be hard to find right? WRONG. After scouring the internet, the only places I could find one was Amazon and Etsy and they were well into the $25-$80 range! *cough* Not in the budget. Being the busy work-at-home mom with a very sociable, have to be around someone...anyone... toddler, I rolled my eyes at making one.

I finally gave in. So I figured, I'd make a very simple basic one that incorporated all of the above necessary skills in life. But, oh no. I'm an Art Director..an arteest. I own my own business and cannot do anything the simple basic easy way. So in my Clark Griswold thinking, I thought...

Wouldn't it be COOL to make a DISNEYLAND quiet book??!!?

And then my brain kicked into gear and next thing I know, I'm making sketches in Adobe Illustrator, hitting Michaels for felt and emptying my sewing box for odds and ends that I haven't ever used.

Then I started sewing and I became OBSESSED with this crazy quiet book. Four pages later and I admit I had a lot of fun making this. Plus it whipped together faster than I expected (during the late night hours when said toddler...and hubby... are snoozing) and I can add pages later if I really wanted to.

So here you have it... Jax's Disneyland Quiet Book pages! I decided to make each page separate instead of a gianormous thick book so he can play with them one at a time. Click on the "lands" below to see each individual page. My inspiration came from this very talented designer. 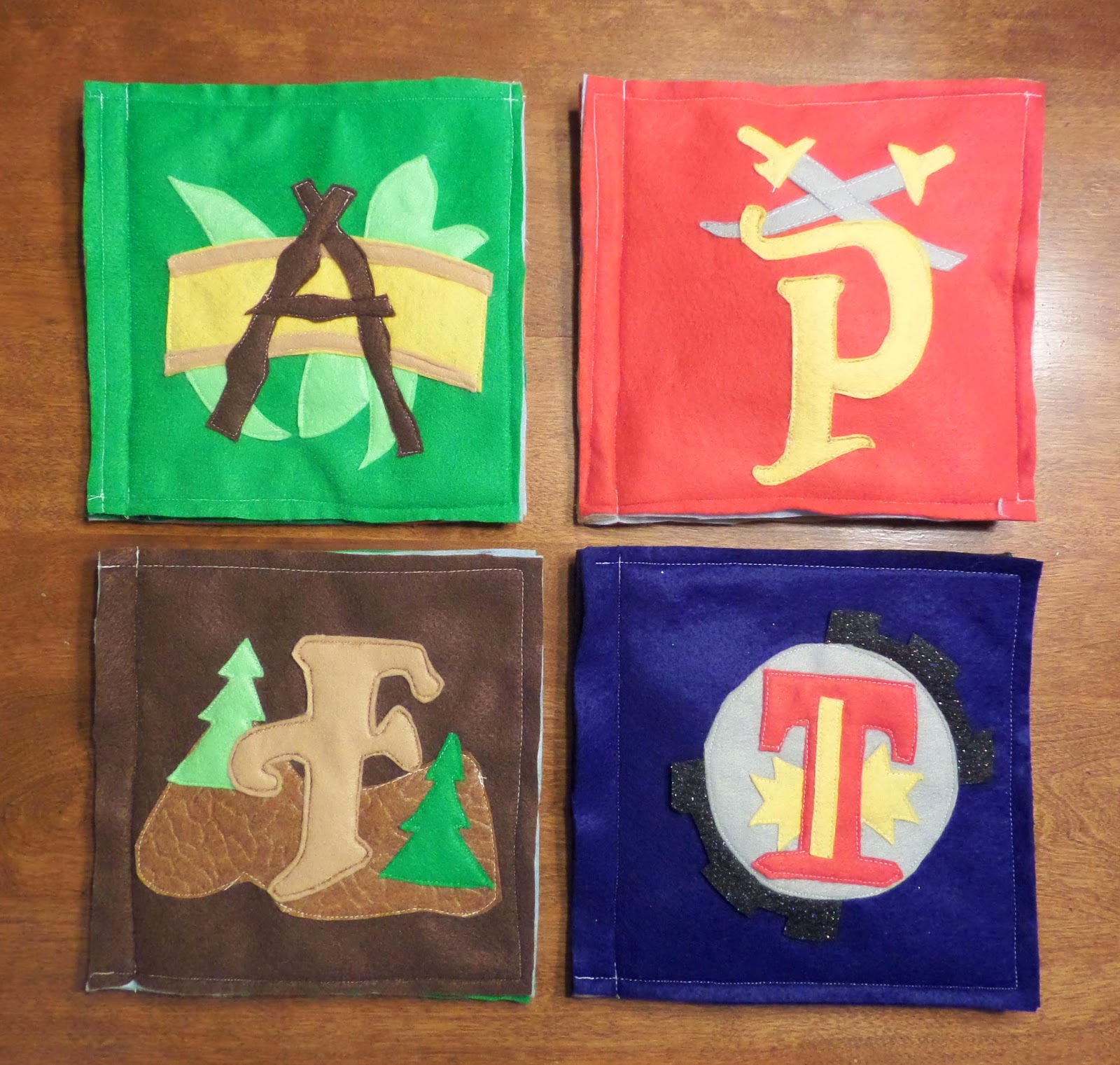 Posted by Don and Denise Sullivan at 11:50 PM No comments:

I have been debating whether to continue this blog. Can you say "BUSY?!" Just no time to write. I find myself on Facebook more because I can write a quick post or upload a quick photo from my iPhone and be done. But I'm sitting here tonight relaxing with my family, updating stuff on my Macbook and thought... what the heck? Might as well update my blog. Go figure.

SO MUCH has happened in the past 7 months since we brought Jaxson home. I am really amazed at how quickly he has adjusted. In fact, I don't recall a grieving period like we had with Nate. However, we did have a bit of a scare a month or 2 after he came home when he had a night terror that appeared to be seizure-like. Scared us to death. He's had several since then but not near as bad. Someone told me it's because they get overheated. He does get really hot at night..even with a light sheet and sometimes even drenched with sweat after a night terror. I started putting a cool damp washcloth on the bottom of his feet when he was in the middle of one and it seems to calm him down. Crazy stuff!

Jaxson is extremely easy going and laid back. He's our social bug. Loves people, loves life, loves music..always smiling and one of the most flexible kids I've ever seen. Maybe that's why the transition has gone so smoothly. He loves his big brother and they can be the best of friends and worst of enemies. haha. I act annoyed when they're aggravating each other but later I smile when I think about it.

Its amazing to me how quickly Jaxson is picking up English. He's saying words on his own and has begun identifying things that are his or ours without copying what we say. I really thought communication would be difficult but it's been pretty easy. We started with sign language and a few Amharic words but it wasn't long before his comprehension just took off. Big brother Nate loves being the little Daddy but Jax is becoming more confident and independent.

Potty training is progressing..only major thing to work on is his learning to tell us "when" he needs to go. Otherwise, he's pretty good at holding it until we tell him it's Potty Time. A big habit to break is his eating habits. He has no cut off switch for eating..snacks or meals and would even grab popcorn off the movie theater floor, stuff it in his mouth faster than we could blink. We've had to teach him to wait for his food without getting mad and to trust that we would feed him. It's an on-going process but he's getting better about it. He prefers spicy, pureed food like Indian food or Ethiopian rather than cut up pieces of meat or veggies. I think his spice-meter is hotter than mine! He'll devour spicy food, nose running and all with a smile on his face. I love it!

He definitely rounds out our household. He's quite a charmer and woos everyone at every store we visit not to mention a funny entertainer. We all just watch him and laugh and he'll milk every minute of it! It was the highlight of 2013 to meet up with several families in St. Louis over Christmas break. Two couples of our friends had adopted from Ethiopia and the other two adopted from China with us. I loved seeing the kids together and it was great to catch up although way too short. Next time we need to stay an extra day at least!

Looking forward to what this new year will bring!

Posted by Don and Denise Sullivan at 6:58 PM 1 comment:

Giving Forward to my Uncle David and Aunt Annette

Get Ideas for Your Next Fundraiser

Our karate class in Northwest Tucson

Promote Your Page Too

Looking for a Tucson church?

Promote Your Page Too